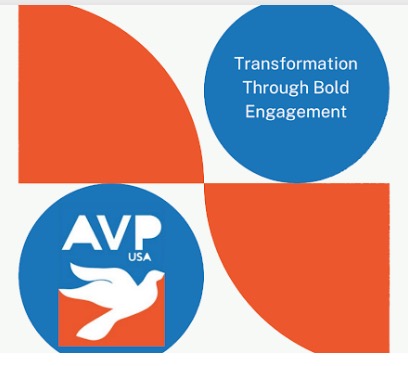 AVP On The Inside

AVP started in prison and continues to flourish there. A total of 14,230 incarcerated citizens in the U.S.A. took the training in 2014. 1500 incarcerated facilitators in 100 prisons work to transform their communities both while incarcerated and upon their release.

The AVP workshops rely on a team comprising a mix of community and inmate facilitators. Inmate facilitators are indispensable for the credibility and personal experiences they bring to the inmate participants of a workshop. And the facilitators themselves, both inside and outside, experience great growth and learning. 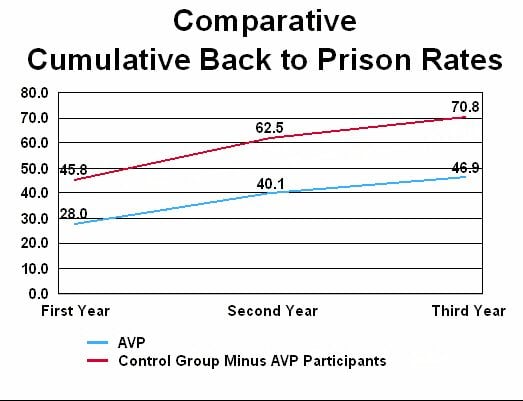 Back to Prison rates in AVP participants compared to other inmates was reduced by 39% the first year after release, and maintained a reduction of 34% after three years. Miller ML & Shuford JA, The Alternatives to Violence Project in Delaware: A Three-Year Cumulative Recidivism Study, Sept. 2005

AVP Outside the Prison

AVP has expanded to serve a wider prison-related audience

If there is such a thing as a miraculous change, then I can truthfully say that it was through AVP. I began to grow from a person filled with hate, anger and despair into a person who believes that he, too, is responsible for the protection, preservation and enrichment of humanity.
”Formerly Incarcerated AVP Facilitator (Robert Martin)

“After being released in 1989, I found myself in need of a new family. AVP became my secondary family. It allowed me to give back to people… to share my experience, my feelings, my life. AVP is essentially the best support system that anyone can have, especially a parolee coming out of prison. I would encourage all parolees who are serious about getting their lives together and doing something positive with themselves to join hands with AVP and make it become your family.
”Formerly Incarcerated (Richard Cunningham)

My name is Talib Shabazz. I was introduced to the Alternatives to Violence Project (AVP) while I was an inmate at the Faribault Correctional Facility. I would like to take this opportunity to share with the readers a little about myself, and the importance of nonviolence. I grew up in Chicago, in a dysfunctional atmosphere. I was introduced to violence very early in my life. It seemed to me like the “normal” way of life. I learned a great deal about violence and used it to control others and situations around me. I was taught that to be tough , macho and in control was manly. This mentality always got me in a lot of trouble. I got involved in gang banging, committing crimes, and attracting enemies to myself every step of the way. My actions led me straight to prison …twice. My second time around, Allah (God) allowed me to wake up to reality. I had to change my way of thinking and my way of life, because “Allah (God) never changes the condition of a people until they change the condition of themselves”. I needed to change me first in order to live a productive life in society. I began to participate in various programs within prison; AVP was one program that I got very involved in. I was among the first group of participants of AVP at the Faribault Correctional Facility., where I learned, first hand, the power of “transforming power”. I had the experience of watching inmates transform from individuals who would never trust each other, no way, no how, to brothers who let their walls down and open up. We shared our thoughts, feelings, war stories and even tears. We trusted each other enough that we even played cooperative games, something that no inmate would have thought they would do in prison, or probably anywhere in their life. Through these experiences,I learned that my need to be in control was not as important as respecting other’s feelings and individuality. Being isolated in prison, I was very impressed that AVP trainers would volunteer an entire weekend to be with a group of inmates. I enjoyed the program and David Miller, as well as other facilitators, so much, that I trained to become an AVP facilitator. I facilitated many groups before my transfer out of prison. AVP has reinfrorced my recently learned values, such as respect, discipline, and concern for others. I am finding these values are very useful out in the free world. I am now free and involved with AVP. I am looking forward to participating in workshops in the community, helping others to learn new ways of dealing with problems and resolving conflicts with nonviolence. Nonviolence is important to me because God created us to treat each other to be a family, with respect, peace, justice, equality and love. May Peace be with you all.